What can we expect from an in-memory system like Apache Arrow:

At this point most of the systems out there hardly support two of the above concepts. Many exist which support one of them. That’s where the Apache Arrow kicks in, which supports all three of them seamlessly.

Arrow is being designed in a way to support complex data and dynamic schema and in terms of performance, it is totally based on in-memory and is columnar storage.

The bottleneck with any typical system comes when the data is moved across machines, Serialization is an overhead in many cases, Arrow improves the performance for the data movement within a cluster without any serialization or deserialization.

Another important aspect of Arrow is when two systems use Arrow as their in-memory storage, for example Kudu could send Arrow data to Impala for analytics purposes since both of them are Arrow-enabled without involving any costly deserialization on the receipt. Inter Process Communication is mostly happening through shared memory, TCP/IP and RDMA with Arrow. It also supports a wide variety of data types which includes both the SQL and JSON types, such as Int, BigInt, Decimal, VarChar, Map, Struct and Array.

Nobody wants to wait longer to get their answers from the data. The faster they gets the answer the faster they can ask other questions or solve their business problems. CPUs these days become faster and more sophisticated in design, the key challenge in any system is making sure the CPU Utilization is at ~100% and is using it efficiently. When the data is in columnar structure, it is much easier to use SIMD instructions over it.
SIMD is short for Single Instruction/Multiple Data, while the term SIMD operations refers to a computing method that enables processing of multiple data with a single instruction. In contrast, the conventional sequential approach using one instruction to process each individual data is called scalar operations. In some cases, when using AVX instructions, these optimizations can increase performance by two orders of magnitude. 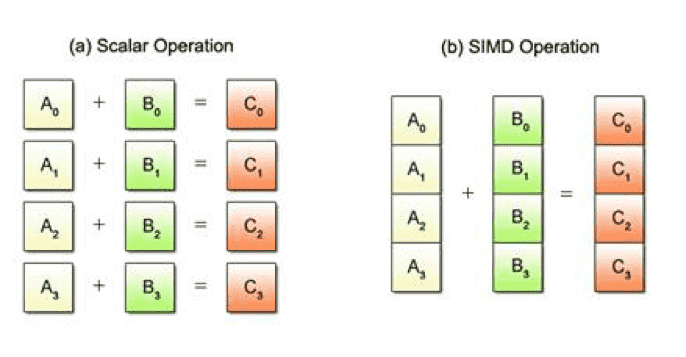 user2022-08-05T08:44:36+00:00Big Data, Data Engineering, Open Source, Real-Time Analytics|Comments Off on Why Apache Arrow is the Future for Open Source Columnar

This website uses cookies to improve your experience while you navigate through the website. Out of these, the cookies that are categorized as necessary are stored on your browser as they are essential for the working of basic functionalities of the website. We also use third-party cookies that help us analyze and understand how you use this website. These cookies will be stored in your browser only with your consent. You also have the option to opt-out of these cookies. But opting out of some of these cookies may affect your browsing experience.
Necessary Always Enabled
Necessary cookies are absolutely essential for the website to function properly. These cookies ensure basic functionalities and security features of the website, anonymously.
Functional
Functional cookies help to perform certain functionalities like sharing the content of the website on social media platforms, collect feedbacks, and other third-party features.
Performance
Performance cookies are used to understand and analyze the key performance indexes of the website which helps in delivering a better user experience for the visitors.
Analytics
Analytical cookies are used to understand how visitors interact with the website. These cookies help provide information on metrics the number of visitors, bounce rate, traffic source, etc.
Advertisement
Advertisement cookies are used to provide visitors with relevant ads and marketing campaigns. These cookies track visitors across websites and collect information to provide customized ads.
Others
Other uncategorized cookies are those that are being analyzed and have not been classified into a category as yet.
SAVE & ACCEPT
Go to Top