Quantum computing and quantum programming are showcasing power to outperform classical computers which otherwise takes large amounts of time for computation. Quantum computing use cases have flooded the quantum research community with Google recently confirming to have achieved quantum supremacy. Talking about the achievement, Sundar Pichai said that it is an important milestone and compared it with the 12-second first flight by the Wright brothers’ in an interview with MIT Technology Review. Similarly, IBM has been working on quantum computing for many years. The task that Google said might take the world’s largest classical supercomputer 10,000 years can actually, says IBM, be done in days.

This blog covers in-depth development around quantum computing and quantum programming, and the real-world applications done by researchers in this domain. Here, we have put in some effort to explain quantum computing and quantum supremacy in our words and to give a brief introduction about the research we have been doing in this domain through IBM Q Experience, which would be covered in the subsequent blogs.

Quantum Supremacy – In our words

It is a very exciting time right now in quantum computing because we’re on the brink of having quantum supremacy, or maybe it’s already happened. To explain Quantum Supremacy, it’s worth explaining what Quantum Computing is and how quantum computers work.

What is Quantum Computing?

Physicists call normal computers ‘classical’ computers and they work on the binary system. There are loads of bits that can either be in a classical state of 0 or 1. In a quantum computer, we have quantum bits, called Qubits. Qubits have a lot of special properties like superposition, entanglement and decoherence.

So what exactly are qubits, and what is the science behind them? There are photon-based qubits, neural atom-based qubits, semiconductor-based qubits and topological qubits. For semiconductor (silicon) based qubits, researchers use the outermost electron in a Phosphorus atom embedded in a silicon crystal right next to a tiny transistor. Every electron has a magnetic dipole called its spin which has 2 orientations, up spin(1) and down spin(0). To differentiate between the states, strong magnetic field is applied using a superconducting magnet which is a large solenoid. At room temperature, the thermal energy keeps an electron bouncing from state zero to one. So, to ensure that an electron is in zero state, apparatus is cooled down. Heating with a pulse of microwave in a specific frequency depending upon the magnetic field electron is at, the spin of the electron can be changed from zero to one. Watch this video to see how it works.

Superposition is a special phenomenon in quantum physics that quantum computers take advantage of. Qubits can be in the state 0, or 1, or they can be in a special intermediate state and that’s called superposition. For N number of qubits, there are a total of 2^N possible states. Now when you measure a qubit the result you get is based on the probability, so if you set the superposition state to be in the middle, there is a 50-50 chance of getting a 0 or 1. But you can tune that state such that you are more likely to get a zero than one, or the other way round. So that’s the first phenomenon of quantum physics that quantum computers take advantage of. To put qubits into superposition, researchers manipulate them using precision lasers or microwave beams 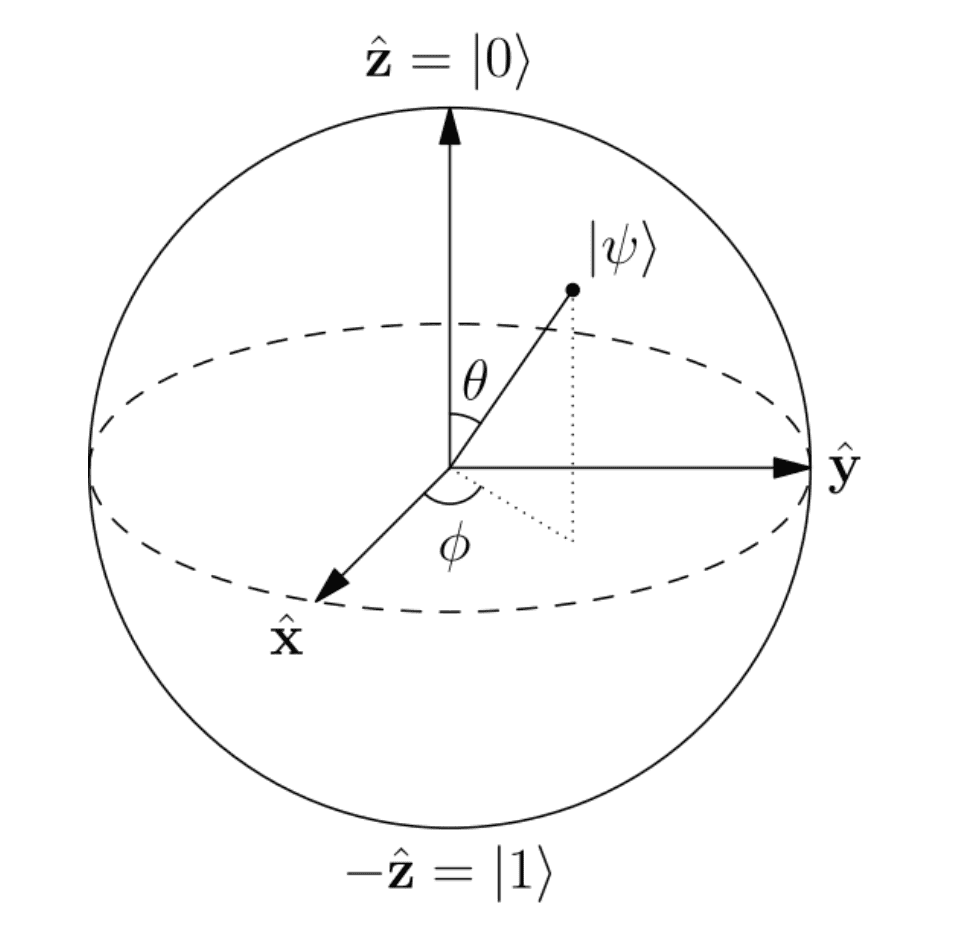 The concept of superposition is important because this is what qubits are about! When it is said that spin of a particle is in superposition of states, it simply means it is in a linear combination of up spin(|1⟩) and down spin(|0⟩). In the Dirac notation, the equation is

Where coefficient α is called the amplitude.

The Dirac notation |ψ⟩ is just a short form of a matrix.

Since the probabilities of measuring all possible states add up to 1 (⟨ψ|ψ⟩=1). Therefore,

The interaction of qubits with their environment in ways that cause their quantum behavior to decay and ultimately disappear is called decoherence. Their quantum state is extremely fragile. The slightest vibration or change in temperature—disturbances known as “noise” in quantum-speak—can cause them to tumble out of superposition before their job has been properly done.

That’s why researchers do their best to protect qubits from the outside world in supercooled refrigerators and vacuum chambers.

Why is Quantum computing so amazing?

To answer that let’s look at the 6 qubit quantum computation. Since 2^6 is 64, it is computed using a sphere in 64 dimensional complex space, which sounds complicated but here’s the important part, it only takes four steps to find this state. But if we wanted to find the same state using a classical computer it could take thousands of steps. The classical computer can only be in one basic state at a time, so it has to follow one branch down the tree at a time but the quantum computer processes an entire level of the tree each step. So this computation only takes 4 steps.

When a quantum computer is in a superposition, it’s processing a bunch of classical states in parallel, but remember what we talked about earlier, the quantum computation will only return one state which is determined probabilistically based on its final superposition.

This means we may have to run the computation a few times to gain the information required but it’s still way less than trying to compute it classically. For certain tasks, quantum computers take exponentially less time than classical computers. Probably the most famous example of this is Shor’s Algorithm. Finding the prime factors of a huge number could take years with a classical computer but with the help of a fault-tolerant quantum computer it’d probably just take a few minutes. Data Encryption and security depend in part on how difficult it is to factor big numbers. The problems of physical implementation can be tricky like quantum decoherence. But the math is on solid footing and ready for the future.

Universal quantum computing can theoretically simulate any system and so it can be one of the fundamental computing machinery of the universe. There are other approaches that aren’t universal like quantum annealing and ion trap systems. What they’re focused on are solving certain problems better than classical computers by taking advantage of quantum physics and they’re a valid approach if those kinds of problems are valuable. They can be used as a good stepping stone towards a universal quantum computer because the universal quantum computers are very difficult to build and it’s good to learn stuff along the way. Qubit is just one measure of how good a quantum computer is. Just as important as how low the noise is in the qubits, so how high the quality of qubits are, and how well qubits stay entangled.

We have been exploring the IBM Q Experience where IBM offers access to the most advanced quantum computers for people like us to do real work, learn, develop, and run quantum programming on our systems with the IBM Q Experience quantum cloud platform. They provide quantum machines with different numbers of qubits which can be accessed just by creating an account. IBM Q Experience also allows you to build your own Quantum Circuits which is a model for quantum computation in which a computation is a sequence of quantum logic gates which are reversible transformations on a quantum mechanical analog of an n-bit register. This analogous structure is referred to as an n-qubit register.

A quantum logic gate is a basic quantum circuit operating on a small number of qubits. They are building blocks of quantum circuits, like classical logic gates for conventional digital circuits. There are a number of quantum logic gates and circuits which we’ll be covering in the upcoming blogs. In the next article, we have tried to explain what we understood from the Quantum Supremacy experiment by Google that startled the world!

Aniruddh Rawat is a Data Scientist at Sigmoid. He works with data and application of Machine Learning algorithms. Currently he is focusing on Quantum Machine Learning, Recommendation Systems